Today is an auspicious day.  Today is a birthday.  Today is a very important birthday of an individual who has had a profound influence on my life and many others.  Few people in the world, or even the Navy, will realize it, but for those of us who know her, know that there is something to celebrate.  Today is the 20th birthday of the USS Oscar Austin (DDG-79).  What is so special about the Oscar Austin?  Who was Oscar P. Austin?  These are some great questions (I’m glad you asked) and I am going to answer them today.

USS Oscar Austin is the 29th U.S. Navy Arleigh Burke-class guided missile destroyer and the first Flight IIA (which has become the predominant subclass) of the class.  She was named in honor of Private First Class Oscar P. Austin USMC of Nacogdoches, TX, who received the Medal of Honor posthumously for heroic action in Vietnam.

Oscar P. Austin was an absolutely amazing warrior.  Although in the Corps for only 10 months, this guy jumped between a fellow Marine and a grenade on the field of battle.  This was enough earn the Medal of Honor, but Oscar Austin wasn’t finished.  Badly injured from the blast he began treating his fellow Marine.  When the enemy tried to shoot them, PFC Austin shielded him again with his body and was mortally wounded.  What happened next isn’t exactly clear, what with fog of war, but I heard that, even mortally wounded, Oscar Austin killed the enemy soldier before succumbing to his wounds.

What a bad ass!  Screw Chuck Norris jokes, kids should be talking about Oscar Austin:  “Did you hear that Oscar Austin had to sleep with the lights on because the dark was afraid of him?”  His name was fitting for a warship.  Here’s a bit of my story of the USS Oscar Austin (DDG-79).  My first ship, my favorite ship, and the best ship in the fleet (although I might be a little biased).

When I reported to the Oscar Austin in November of 1999 she wasn’t even a warship yet.  We were the crew of the pre-commissioning  unit.  Precom duty is interesting.  It’s like the opposite of boot camp.  It starts off really easy and gradually becomes very hard.  You start off living in barracks, working short hours and going to Navy schools.  By the time the ship commissions your working half-days (that’s 12 hours in the Navy) with a different inspector crawling up your butt every day.  But it doesn’t matter because it’s really impressive to watch a fully operational warship come to life.  We moved aboard the ship on May 16, 2000 in Bath, Maine and prepared to sail to our new homeport in Norfolk, VA.

On a hot summer evening in Norfolk on August 19, 2000, USS Oscar Austin was officially commissioned as a warship in the United States Navy.  A long list of distinguished guests (including my parents and grandparents) were in attendance.  Long and boring speeches were given, or maybe they just seemed that way to me as I stood at parade rest sweating for hours.  Our ship’s sponsor gave the command, “Man our ship and bring her to life!”  The crew ran aboard the ship and manned the rails.  Radars spun, guns elevated, the ship’s whistle bellowed into the otherwise quiet night.

Just before we manned the ship, the spirit of PFC Oscar P. Austin was rung aboard.  Eight tones of bell rang out with the Officer of the Deck announcing, “Medal of Honor recipient, arriving.”  It was a moving and touching part of the ceremony.  However, Sailors’ dark humor being what it is, we blamed everything that went wrong on the ship being haunted (we’re a sick bunch).

Not long after, Oscar Austin, or OA as we came to call her (we never called her “Austin” as there was an LPD with that name), was underway for her shakedown cruise,  visiting the Caribbean for the first of many times.

I spent 5 years with the OA.  It was some of the worst and some of the best years of my life.  I met some of the most incredible people and some of the oddest people, and every kind of person in between.  I sailed the Caribbean, the Baltic Sea, the Mediterranean Sea, the Persian Gulf visited numerous ports.  Drank a lot of alcohol and spent far too much time with my head over the side of a bridge (if you catch my drift).

Your first ship is a unique experience.  You’re still a new Sailor and you still miss being a civilian.  There is no frame of reference to cloud your experience.  No past duties to compare.  Everything is new, confusing, amazing, and overwhelming.

A ship is like a family.  A very dysfunctional family, but a family.  That’s the Oscar Austin.  There is not a person that served with me during those 5 years, that I wouldn’t die for.  Although there are a few for whom I would do it grudgingly.

What could I tell you about my time on the OA?  How about the Chief who went crazy in the middle of the night in Berthing 1 looking for stowaways (while we were still inport)?

There was the time I went to XOI for getting punched in the face by a much larger and much drunker Sailor and was stuck on “liberty risk” for half the cruise.  This happened on the same night that two SMs tried to climb the mast after drinking a bottle of whiskey (yet I was the one to go to XOI… not that I’m bitter).

I remember our ten day port visit in Brest, France (where I learned to speak with an obnoxious French accent) where the entire crew balanced duty days and alcohol poisoning.  After that we spent 4 days in Rotterdam / Amsterdam which was immediately followed by an all hands drug test (and we all passed).

I was eating lunch on the mess deck February 18, 2001 watching the Daytona 500 when Dale Earnhardt hit the wall on the last lap, although I didn’t realize he had died until the newspaper arrived the next morning while sanding the pier sentry watch.  Later that year greater tragedy hit as  I was sweeping the bridge and heard that a plane had crashed into the World Trade Center on September 11.  That event defined the rest of my tour and really the rest of my Naval career.

My first deployment took me to war for the first time.  The first half of the cruise focused on the build-up to the invasion of Iraq, escorting war supply ships through the Strait of Gibraltar and Bab-el-Mandeb (referred to as the “BAM” for obvious reasons).  The rest of the cruise saw us supporting Shock and Awe and the invasion.  We launched at least 30 Tomahawk missiles into Iraq (and thanks to CNN, watched some of them land).

We captured an Iraqi tug boat off the coast of Bahrain after an all-night chase through shoal water on uncorrected charts (talk about pucker factor).  Just when our VBSS boarding team was going to get their chance for glory, the USS Cowpens showed up with their embarked Coast Guard law enforcement detachment to take the Iraqi sailors prisoner.  The OA was left to stand guard duty on a deserted, anchored old tug while the Cowpens and LE Det took the prisoners back to Bahrain for victory partying (I assume, I have no idea what they actually did).

I served with hundreds of American Sailors on that tour.  They fit in every category that you can possibly think of.  Every color, religion, or creed.  Every intelligence level, hobby, interest, obsession, and vice imaginable.  But they were all family.  A dysfunctional family, maybe, but family none the less.

Since my time on the OA we have lost some of these family members.  One to enemy action, one to a senseless murder, and others to accidents or illnesses.  Every time I hear about losing another OA shipmate, whether or not we knew each other well or whether or not we could even stand each other, it breaks my heart.

My tour on the Oscar Austin ended in October 2004.  I had spent just under five years with her and I was one the last five plank-owners still aboard.  Plank-owners are entitled to bells on their final departure.  Mine came shortly after the ship moored from a brief underway.  It is customary for the departing Sailor’s division and friends to see them off on the Quarterdeck.  In addition, I was honored that every division officer aboard showed up.  As a Quartermaster, who stood watch on the bridge with these officers, it is was one of the highest honors I could have received.

I have lost touch with most of shipmates from that tour.  Sometimes I’ll come across one of them online.  Even rarer I’ll come across someone in real life.  Whenever that happens, I regress to my younger self and start reliving my life on the old girl.

In 2018  there was a serious fire on the ship, and she is still in the shipyard getting repaired from that accident.  She’s not quite as pretty anymore.  She’s got some rust and whole lot more layers of paint these days.  But a 20 year old ship isn’t supposed to look as pretty as new ship.  A destroyer is a work horse.  She ages like a jeep, the older and more banged up she gets, the more impressive she looks. 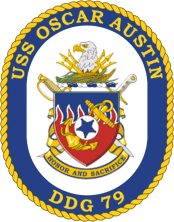 It’s been 16 years since I’ve left that ship.  I have had an great Naval career.  I’ve been on four more deployments and been to numerous countries.  I have been accepted in the Chiefs’ Mess.  I even grew up a bit (although there is some debate on how much).  But looking back, it’s hard to think of anything more impressive than that ship.  She was my first ship, and I was her first QMSN.  We started our Navy lives together.  Now I’m retired and she’s still standing the watch.  Congratulations on a proud and successful career.  Happy 20th birthday USS Oscar Austin (DDG-79)!  Next year you will be old enough to drink, and the first round is on me.

Check out some of my other articles here.

If you have a question for me and don’t mind a dubious answer click here.