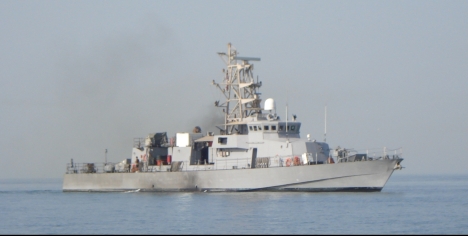 It’s that time again, loyal fans! It’s time for me to open up my email and to read your many questions.

Billy from Sandusky, asks: Why don’t Navy guys get eaten by sharks more often? Because Sailors are on ships and the sharks don’t have proper I.D.

Maggie from San Diego asks: I’ve heard of people getting out of going to prison by joining the Navy. Is it possible to get out of the Navy by going to prison? Wow, I know the Navy can be rough at times, but is it really that bad for you? To answer your question. Yes, that is an option. See your master-at-arms for more details.

Randall from Houseton, TX (yes, “Houseton”) asks: Is it true that ships float because they’re bouncy? That’s what my science teacher told me, but I can’t believe a big metal ship would bounce. To tell you the truth, Randall, ships can be very bouncy in rough seas. I don’t think that’s why they float (although there were times I thought it might make them sink). Just a shot in the dark, but your teacher may have said that ships float because of buoyancy. See your local Army recruiter for more information.

After these fantastic questions, which caused only slight despair for the future of this country, I got this one from Reggie from Riverdale (please let that be his real name and city). He asks: Why does the Navy use “port” and “starboard” instead of “right” and “left?”

This is a great question (if only by comparison). There are a number of reasons for this one. First of all, nothing in the Navy is the same as it is in the rest of the world. Bathrooms, water fountains, mops, buckets, floors, etc. all have there own special names when on the ship. It’s part of naval culture. Like barfights in Singapore. If we just called it right and left how would that be special? You might as well be in the Army. And you don’t want to be in the Army do you Reggie? Do you?

Also, keep in mind, left and right can be confusing. Have you ever given directions to someone driving?

You: “Turn left at the light.”

You: “The light your passing right now, moron!”

Driver: “Why are being so hostile?”

You: “Because you’re an idiot who can’t follow simple directions.”

Driver: “If you could give simple directions, it would be easier to follow them.”

See how confusing that can be? Historians now believe this is the how Christopher Columbus set out for India and ended up in America. Now let’s try that scenario again using port and starboard instead.

You: “Turn port at the light.”

See how more efficient that was? This is why the U.S. Navy dominates the seas.

Strictly speaking port and starboard are not simply directions. They are locations in relation to the ship as a whole. Port is the left side of the ship when facing forward. Starboard is the right side of the ship when facing forward. Think of it like a car, where we have a driver side and a passenger side. Port is driver side and starboard is passenger side.

Little known fact: Early mariners actually used the terms “driver side” and “passenger side” prior to the invention of port and starboard. However it was cumbersome for lookouts to make reports, “I have an unknown contact off the passenger side bow moving passenger to driver.” Additionally, since this was before the invention of the automobile, nobody had a clue what anyone was talking about.

There is no exact consensus on why the terms port and starboard were chosen. Many believe that the port side was tied to the pier when they named the sides, and the only thing they could see on the other side was the stars. Also for some reason, the British started calling the port side “larboard” for a while. I’m being serious. Apparently, because “left” and “right” were too likely to cause confusion, they opted for two words that sounded virtually identical. I can’t imagine any situation where this could cause a problem.

So as you can see, Reggie, port and starboard have a long and important history, not just to the U.S. Navy, but to the entire maritime world.

Check out some of my other articles here.

If you have a question for me and don’t mind a dubious answer click here.